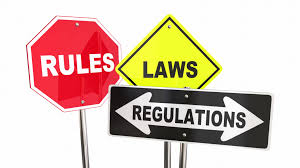 While I went to law school for a law degree and stayed an extra year to get a tax LLM degree, my feelings about the law are as simple as: “the rules are the rules are the rules.” Maybe it’s my stubbornness, but I believe that any policies, rules, regulations, and laws have to be adhered to. It’s not just about the rules regarding retirement plans, it’s also about the policies and procedures put in place at the workplace.

If you run a business, you need to put rules in place at the workplace to avoid anarchy in the workplace. I always say that one of the reasons I try to avoid hiring an employee is that I was an employee once too and I’ve seen firsthand how businesses became like summer camp when the bosses show the example by leaving early on Friday afternoon or are the first ones to leave when the offices have to close for inclement weather (sorry Dan).

Rules are about keeping order and adhering to the rules in the workplace is a sign of respect and respect for the leadership in that workplace. The problem with rules is when they are being completely ignored or when there is selective enforcement of those rules.

If as a boss, you tell people that they shouldn’t be conversing on their cell phones at work unless it’s an emergency, the rule has to be implemented fully. Allowing people to talk on the cell phone to chat with their friends make the rule an absolute joke and also make the people who implemented a rule like that, look foolish as well. The same can be said if the rule is selectively enforced and employees that the bosses like or are afraid of are given a free pass while the rules are enforced against others. I can assure you that from a labor law point of view, selective enforcement isn’t good.

Respect is something that’s earned and when you lose the respect of the workforce, it only makes your role as a retirement plan provider that much harder because people work harder for people they have respect for and the inmates run the asylum if they don’t.