You need to be accountable

You need to be accountable 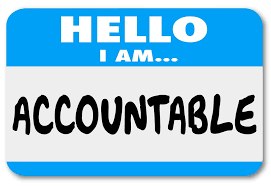 People don’t like to be accountable for the most part. It’s just human nature to blame someone else. Heck, I used to do it at work and I still do it at home (sometimes).

When I was working at that law firm and I wasn’t able to draw enough business to my practice, I can fault the law firm partners who didn’t refer me work or the marketing office couldn’t help so much because they were doing work for other and the process took 6 months to get an article published. Ultimately, it was my fault that I didn’t get it done. So I dusted myself up, went on my own, and the rest is history (I mean it’s in two eBooks). I changed what didn’t work and what I wasn’t allowed to do (social media) and I was able to support myself on my own.

Too often plan providers get in the business of not admitting fault when they make mistakes and it’s frustrating for plan sponsor because sometimes all they want is a simple apology.

An apology is not an admission of guilt, it’s just an expression and sometimes just saying you’re sorry is what minimizes small disagreements into becoming World Wars. I know firsthand, I grew up in a family where you think an apology was draped in the blood of the one who offered it. Being accountable and admitting when you’re wrong is just good business skills. It’s a great way to retain clients because it’s the unhappy clients who leave.