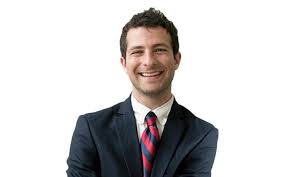 I don’t know that much about depression because I still don’t know what to look for. In terms of dark times, I think of law school. I don’t know if I was depressed that second year at the American University Washington of Law or just simply disillusioned with the study of law or the idea of becoming a lawyer. I was consumed by that disillusionment and by anger about a law school and faculty that just really wasn’t honest about things and could care less about the bulk of the student body.

There was a light in that darkness and his name was Associate Dean Jamin Raskin. While I thought his political views were wacky left, I could kid him about it, when you could respectfully disagree with someone politically (the good old days before social media).

Professor Raskin was a friend when I needed one and even when I was tearing the law school apart with my columns as the Executive Editor of The American Jurist during my final year. When I broke the story about a law journal and a scandal surrounding the recording of hours of work, Raskin defended me to the faculty and led to protecting the whistleblowers from retaliation from that law journal’s staff. Raskin even threw me a shout out as he was the ghostwriter of the Dean’s speech at graduation.

I think that there would be no Rosenbaum Law Firm or That 401(k) Conference if I didn’t meet Congressman Raskin. I wanted nothing to do with being a lawyer after law school, I thought about opening a business of some kind unconnected with the law. Raskin was a beacon of light in dark times.

I’ve been in the business of running 401(k) conferences to benefit my law practice. My national event will be virtual and aside from having Walt Frazier and my childhood idol Doc Gooden there, I wanted to invite Congressman Jamie Raskin there because I thought it would be funny to talk to him at an event that none of us could have thought was possible 25 years ago, especially with him becoming a Congressman. I didn’t know if he would have time to show up for my event, but I knew he wouldn’t show up if I didn’t ask. Being who he is, Congressman Raskin accepted a speaking slot.  I look forward to talking to my friend, but if he cancels, I understand.

I would sit in his office at law school and he would tell me about his kids. I knew Hannah loved Madeline, his son Tommy and his younger daughter were born during my time there.

As a father and as someone who was lifted by Congressman Raskin from pity and disillusionment, I am devastated by the loss of his son. Tommy Raskin would have been a beacon of light like his dad, but depression took out that light.