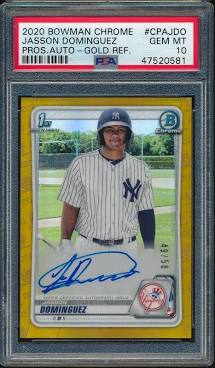 The COVID pandemic and sports documentaries like ESPN’s The Last Dance has created a fervor in sportscard collecting. Graded rookie cards have been selling for millions as records have been broken for sales in. every sport. The problem is we’re in a bubble and the bubble will burst.

I bought a Tom Seaver 1967 Rookie card PSA 9 for about $6,500 last April. The most current sale for January was for over $20,000. That’s just one example as even cards of current players have sold for hundreds of thousands of dollars.

Why will the bubble burst? The pandemic will end and we won’t be “locked” in our houses, allowing for travel and other ways to spend money. Also, the economy may slow down and when money is tight, people have less money to spend on trading cards. The biggest victims of the bubble burst are the collectors that shelled hundreds of thousands of dollars on the cards of current players. Paying thousands and thousands of dollars on rookie cards of Giannis or Zion, you’re just one catastrophic injury from the cards being semi-worthless. I collect vintage cards and while prices may dip, players like Reggie and Hank Aaron will still have their sterling career statistics intact.

Sportscard collecting is fun, but it has been quite pricy, and like with Internet stocks from yesteryear, these values can’t be sustained forever.