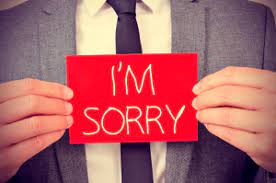 On Columbus Day, I was running an errand in my Prius V, and a woman in the right lane crossed over and hit my car. The woman immediately followed me into a parking lot. I was mad because I had damage and the car would have to be repaired. The first thing the woman did when talking to me was to apologize and admit fault. At that point, I couldn’t be mad because what was done was done and she admitted fault. Perhaps, if she was a man, instead of an apology, I might get the complaint that it was my fault.

When you do something wrong by the client, admit your mistake. This isn’t like confessing to a crime, just admit what you did and try to fix it. Being obstinate and trying to lay blame on your client is only going to exacerbate the situation. I’ve had clients over the years when dealing with plan providers, that their animus for an error is only because the provider refused to admit it. I’ve had a relative who would rather die than offer an apology. An apology isn’t legally binding, it’s a sign of empathy.