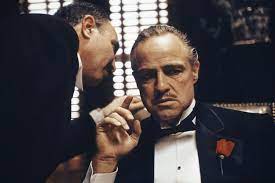 I was probably 9 or 10 when I was interested in The Godfather. It wasn’t a movie for a kid that age, but I knew at that age was that it was something special. I don’t remember when I first saw it or first saw it completely, I knew it was a masterpiece.

Like me,  The Godfather celebrates 50. The movie is slightly older (by release date) and more recognized,  but I’ve always felt a connection to it. I’ve read the original book, owned about 4 versions of it (VHS, DVD, Blu-Ray, and Digital), and saw it in the cinemas on its 25th anniversary. At times I swore Part II was better, but I’m convinced that the original is still the best even if Part II is the greatest sequel of all time.

The funny thing about the movie is that while it’s considered a masterpiece, director Francis Ford Coppola was being second-guessed by the Paramount executives throughout preproduction. He was fought on casting (executives thought Marlon Brando was box office poison and Al Pacino was just a midget), filming, editing, and music. Coppola even lost the Best Director Oscar to Bob Fosse for Cabaret. Despite people thinking that The Godfather is a classic, it just didn’t start that way.