Winning Time is winning, except for the truth

Winning Time is winning, except for the truth 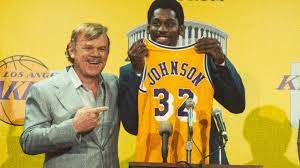 While Don’t Look Up was a miss, I’m a fan of Adam McKay. So when I heard he was using Jeff Pearlstein’s Showtime book on the 1980s Lakers, I thought it was going to be a home run. That was confirmed with the trailer, which was sensational.

So far, it’s a solid show with John C. Reilly doing a heck of a job as Lakers owner Dr. Jerry Buss. The rest of the cast is great as well. The only problem is that they probably should have changed the names on the show because there is a lot of fiction going on, with scenes that aren’t reflected in the book.

Portrayals of Lakers legends Jerry West and Pat Riley are farcical and I just know that, reading and reviewing books on that team and that era, as well as West’s autobiography.

I understand the need for drama, but that team already had that when Head Coach Jack McKinney nearly died while on his bike, way before Magic’s game six against the 76ers in the NBA Finals.

While it’s a good show, it’s playing with the facts that take away some of the enjoyment.