Wrestlemania is the Academy Awards of Wrestling

Wrestlemania is the Academy Awards of Wrestling 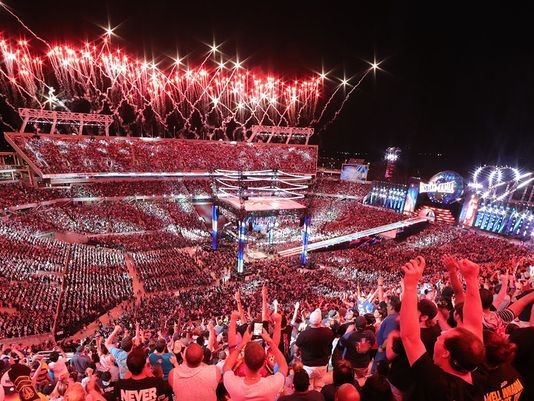 Everyone jokes about how long the Academy Awards are. It’s usually 3 ½ to 4 hours. Imagine a wrestling show that was 6 hours long. Actually don’t imagine, because Wrestlemania XXXIII lasted 6 hours and 5 minutes. I wouldn’t be complaining if the show was great, but it wasn’t. The show just showed what the problem is with the product.

There were certain highlights for the events especially the return of the Hardy Boyz after their 7 year exile to TNA. The Hardys got a tremendous ovation and won the Raw tag team titles in a pretty good fatal 4 way ladder match. The crowd during the Hardys return should be compared to the dead crowds for the Bray Wyatt-Randy Orton, Brock Lesnar-Goldberg, and Roman Reigns-Undertaker matches. As a long time fan of the WWE and Jim Crockett NWA, you know what a hot crowd sounds like and Vince McMahon should notice what the fans got excited about it and what it didn’t care for. 10 years pushing Randy Orton down our throats has never gotten him to the superstar level. Orton can wrestle, but his personality is as exciting as cardboard. The Goldberg experiment is thankfully dead, I’m surprised his match with Lesnar was more than a minute. I never understood why they brought back an age 50-year wrestler who was popular for about 2 years 16 years ago, but that’s probably above my pay grade. The attempt to get Roman Reigns over goes on for another year and no matter what Vince thinks, Roman will never catch on like his “cousin” The Rock did. The Rock had “it” and Roman doesn’t, he has no personality ad doesn’t seem to have a feel for the wrestling business. He always looks bored.

It was great to see Jim Ross come back for one more match in announcing what probably will be Undertaker’s last match, just a few weeks after his wife’s death in a vehicle accident. Ross’ performance showed once again what good announcing could be like.

Wrestlemania has turned into the can’t miss show of the year to a bloated extravaganza where the wrestling card no longer matters and it’s more about how large of a fake attendance mark they claim to break.

The should go back to the basics, a three hour show and not trying to squeeze in everyone for the roster into the show could help. Wrestlemania should be what it used to be; the Super Bowl of Wrestling and not a bloated spectacle like the Academy Awards. By the way, Jimmy Kimmel did a better job hosting than The New Day and I like The New Day.