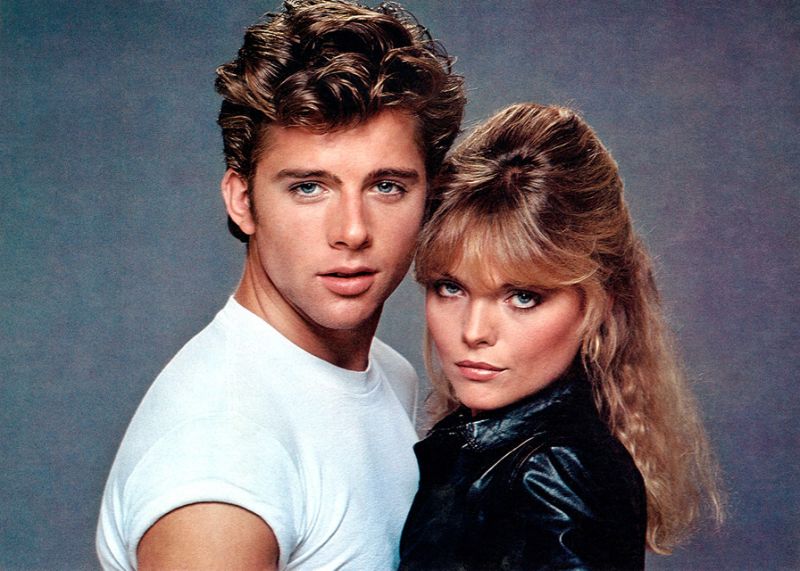 Grease was a hit when released in 1978, which was based on the Jim Jacobs-Warren Casey Broadway musical. It featured John Travolta who was hot off Saturday Night Fever and Welcome Back Kotter and Olivia Newton-John, who was a big-time musical star. Unbeknownst to most, producer Allan Carr was to receive $5 million if he produced a sequel of Grease as long as production would start within 3 years of the release of the original. Carr didn’t bring back Jacobs and Casey to develop a sequel and didn’t fully pursue Travolta and Newton-John to see if they would continue with a sequel.

Grease 2 would start from scratch with a story of Olivia Newton-John’s character of Sandy Olsen having a British cousin who was now going to Rydell. Michael would battle with the T-Birds to win the love of Pink Lady, Stephanie. Rather casting some well-known names for the main roles, Carr cast Maxwell Caulfield as Michael and Michelle Pfeiffer as Stephanie. This is before Michelle hit it big with Scarface and just a few years after The Delta House TV show. To fill out the cast, Carr hired Adrian Zmed from TJ Hooker and Lorna Luft, who is best known as Liza Minelli’s half-sister. The film also featured Maureen Teefy as a Pink Lady, fresh off her role on the movie Fame, and it did recycle Grease veterans like Eve Arden, Sid Caesar, Didi Conn, and Dody Goodman.

The movie falls on all corners. The songs were mostly developed by Louis St. Louis, who wrote a couple of songs for the original movie, but they weren’t catchy as the original, which was based on a much loved Broadway musical. There is also absolutely no connection between the audience and most of the characters. Lorna Luft looks way too old to be in high school and no one in the audience was vested into Maxwell Caulfield’s character. You end up not really caring who Michelle Pfeiffer’s Stephanie would fall in love with. While Grease 2 flips the gender on the character leads and Stephanie is a female version of Danny Zuko and Michael is a male version of Sandy, it just falls flat.

While there are articles that practice historical revisionism by suggesting Grease 2 is better, these are usually written by people not old enough to have seen the original while seeing Grease 2 on a continuous loop. While Grease 2 is cheesy fun, it can’t hold a candle to the original.

Grease 2 could have been a much better film if they tried to recruit Travolta and Newton-John or tried to hire better-known actors rather than the not well known Caulfield and Pfeiffer. Dreams of followup films and a TV series that Allan Carr might have had died with Grease 2.