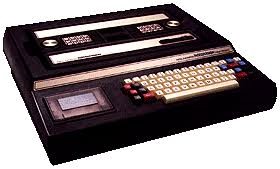 While Atari had a hit on its hand with the 2600 game system in the late 70’s and early 1980s, it seemed that every electronics company wanted in. Magnavox, Mattel Electronics, and Ballys were some of the players to be the competitor with Atari. The best of the batch was Mattel’s Intellivision, as it offered superior graphics to Atari’s 2600. I know since my parents bought me one in 1981 at the discount price of $215.

When Intellivision was released, a great selling point on the box was that they were developing a keyboard computer addition to the system.  The Intellivision was designed as a modular home computer. The Master Component could be purchased as a stand-alone video game system and the Keyboard Component could be added, providing the computer keyboard and tape drive. There was also built in ports for a microphone and a thermal printer.

The Keyboard was very ambitious for 1979 and anyone buying an Intellivision had high hopes for the product. The problem is that it was 1979 and the product was unreliable in testing. By 1981, the product still wasn’t out. The problem was so bad that it became a joke. Jay Leno at the 1981 Mattel Christmas party had a joke in his set: “You know what the three big lies are, don’t you? ‘The check is in the mail,’ ‘I’ll still respect you in the morning,’ and ‘The keyboard will be out in spring.”

It was no laughing matter for Intellivision buyers who wanted the keyboard and claimed they only bought the Intellivision based on the promise of a keyboard. The problem was that the Federal Trade Commission (FTC) got involved. who started investigating Mattel Electronics for fraud and false advertising. In mid-1982 the FTC ordered Mattel to pay a monthly fine (said to be $10,000) until the promised computer upgrade was in full retail distribution. The problem was that there were only 4,000 units that were ever released and Mattel decided to kill the product and replace it with a cheaper Keyboard component called the Entertainment Computer System to placate the FTC. It had a keyboard and BASIC with some added games and nothing else. My parents bought me one in 1983 when it ended up in a liquidation store, it was buggy as heck and never seemed to work even though World Series Baseball would have looked great.

Part of Mattel’s settlement with the FTC involved offering to buy back all of the existing Keyboard Components from customers. Mattel provided a full refund but without a receipt paid $550 for the Keyboard Component, $60 for the BASIC cartridge, and $30 for each cassette software. Any customer who opted to keep theirs was required to sign a waiver with the understanding that no more software would be written for the system and absolved Mattel of any future responsibility for technical support. They were also compensated with $1000 worth of Mattel Electronics products. It was a costly fixed for a keyboard that couldn’t be fixed.

The lesson here is that it’s one thing to put out a buggy product, it’s another thing to never put it out.