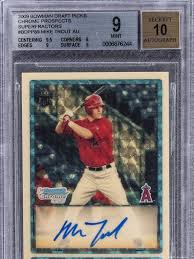 Maybe thanks to COVID, but there has been an explosion in auction prices of trading cards of current players that in my mind, is creating another sportscard bubble.

The current sports card market is predicated on card manufacturers creating rare cards with autographs and jersey swatches attached with card boxes costing hundreds to thousands of dollars. The low print run of today’s card business compares favorably to the overprinted production run of the sports card business in the 1980s and 1990s. While this bubble will circle on scarcer cards, the prices are a whole more than the Ken Griffey Jr. Upper Deck cards I got in 1989.

A Giannis Antetokounmpo one-of-one rookie patch autograph was sold at auction for $1.812 million. Luka Doncic, Zion Williamson and Ja Morant rookies are routinely going for $50,000 or more. A Mike Trout one-of-one rookie went for a staggering $3.9 million, which is more money than what the Honus Wagner T206 card fetches.

The problem with buying a Giannis card for $1.812 million, he is one catastrophic injury away from ending his career. The same with other current players. A 1952 Topps Mickey Mantle is a better buy than any Mike Trout because Trout could be injured or his career could go badly if he loses his ability to make contact at the plate. Current cards of current players remind me of the Internet stocks of the late 1990s. Sure, the upside may be great short-term, but the ability to crash is high. I collect high-grade vintage cards. I bought a 1967 Topps Tom Seaver for about $6,300 four months ago, based on pricing, it’s been double. Tom has passed away and his last year playing was 1986, there is no speculation and people aren’t finding mint Seaver cards in their basement anymore.

While my card collection won’t make me millions, it will still appreciate in value because the cards are rare and the careers of the players (aside from Gil Hodges, who should be in the Hall of Fame, I collect Hall of Fame members) have been set.

I believe the current bubble will last until one of the rising stars in sports has a catastrophic injury.